So lots of hackspaces are in buildings which are not heated. What heating solutions do people use, given that optimal variants should be efficient, economical to run, suitable for unscheduled usage, and less evil to the planet?

At Reading Hackspace we occupy a small industrial unit of around 150 sqm total area. About 40% of the space is a mezzanine and we only heat/cool that area. Walls are typical thin metal shell with some internal blockwork downstairs, and only about 100mm insulation on most of shell.
We had problems of both cold in winter and too hot in summer.
We insulated the ceilings of the mezzanine with suspended tiles and lots of insulation. Laid laminate floor and sealed drafts and dust from downstairs.
Installed a heat pump [ http://rlab.org.uk/wiki/File:ElectriQ_Split_manual.pdf]
Installed temperature monitors around space with logging. [http://shubster.co.uk/rLabTemps]
Occasional space heating downstairs
Come visit.

Not only unheated but restricted in what we can use because of Insurance rules.
Swindon Makerspace is a 600 sq ft, breeze block unit with a concrete floor
We have a high vaulted ceiling (eventually will become a Mezzanine floor) so we constructed a canopy from a heavy opaque tarpaulin, this an attempt to lock in the heat.
We used three fan heaters to provide heat, but not to be recommended, one recently had a meltdown, with think from accumulated sawdust, etc., filling the space smoke and ash.
We now have some Halogen space heaters, but it is an ongoing experiment.

You should look at infrared heaters. There are different types. The glowing red type in pub gardens are obviously an option but they have a annoying red glow.

There are alternatives which don’t glow red at all.

The nice thing about these is you are heating people now the air. So people feel warm but you don’t heat the air which escapes or rises into the roof.

Infrared heaters seem like a good shout - we just got one for our workshop at home.

We also had good results from PVC butchers curtain at Nottinghack (This kind: http://redwoodstripcurtains.co.uk/images/DoorClosed.jpg ), for creating smaller heatable zones in a larger studio/workshop. It meant a small fan heater could then be useful rather than pointless.

Propane space heaters work fast, but also create a lot of condensation, so as soon as you turn them off people start to feel cold no matter how high you get the air temperature.

The butcher’s curtain worked well at making smaller, heatable, spaces but
had the unintended side effect of making the hackspace look like a place
that serial killers hang out.

Murder curtains do not make a good first impression to your visitors,
especially those that aren’t white middle aged men!

I never heard that while we were both on the board James. Is that feedback we got, or just one of your many opinions?

At Leeds Hackspace we danced around all sorts of solutions (https://groups.google.com/forum/#!topic/leeds-hack-space/ERRlGbXWob0) and due to insurance issues, along with people plugging in electric heaters to extensions and causing melt downs, came to the conclusion of using convection heaters (after calculating heat units necessary) and closing off areas of the Hackspace with curtains and ensuring all gapes/doors/etc had appropriate draft excluders on them was the best solution.

Ideally we’ll also change the plugs on any convection heaters and dedicate a circuit to them to prevent user acted accidental meltdowns.

At Nottinghack we realistically only have one room we can really keep warm in the winter, and that’s heated as needed by a fan-heater.
The murder curtain (it wasn’t just @geeksareforlife that called it that), since replaced by an, ummm, regular curtain, means another area can be heated a bit in winter with a fan-heater, but it’s not terribly effective (too big an area, too much ventilation).

A propane space heater, whilst very effective at heating the larger studio area, resulted in complaints from neighbours regarding the smell, and wasn’t technically permitted anyway, so isn’t used anymore.

Like I’m sure many other hackspaces, we graph the temperatures of different areas:
https://cacti.nottinghack.org.uk/graph_view.php?action=tree&tree_id=1&leaf_id=8&nodeid=node1_8&host_group_data=
The “Blue room” is the small room we can properly heat, and the “Comfy area” is the one that’s separated by a curtain, and sort-of warmed a bit.

Infrared heaters sounds like a good idea, but I image the ones that do glow red would be a better bet as I suspect they’d get left on slightly less often.

This is a timely discussion for us at Leigh Hackspace - we have about 4500sqft (just over 400m2) of Victorian red brick mill type affair (no insulation, huge flat concrete roof, we are top floor), and until today we were using a combination of:

We try to minimise heating, for both cost and ecological reasons

But today there was a bit of an ‘issue’ with one of the gas cylinders (a leak) and so we’ve now been told by the landlords that we can no longer use gas. So we’re having to reconsider what to use for the best. It’s reassuring we are not the only Hackspace with the same problems of huge freezing buildings!

We had two ladies comment that it looked like the set of Dexter - it didn’t
help that it was winter and the comfy area lights were off!

After that I couldn’t see it as anything else

IR Heaters do not heat the space the heat the surfaces, specifically the humans.

Basically it makes people feel warm by toasting them however leaving them on when there’s no one around is a waste because it only warms the surfaces so things get warm but not the air.

Murder curtains do not make a good first impression to your visitors,especially those that aren’t white middle aged men!

Would Painting and decorating said curtains improve the view or just make them look like shower curtains? 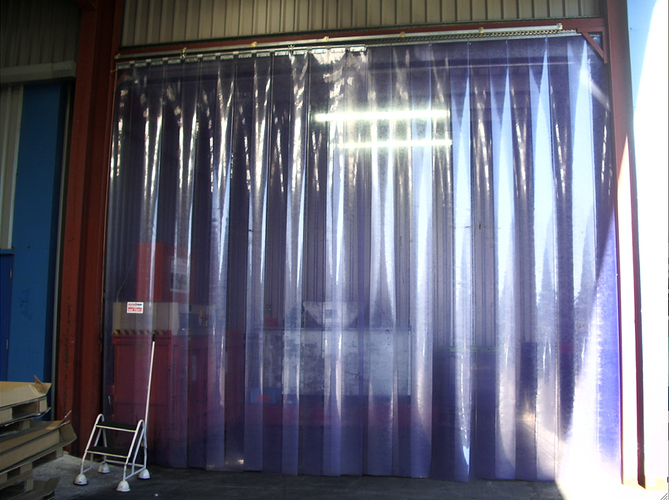 In the end, we replaced them with fairly thick “normal” curtains that run floor to ceiling. Not as cheap, but they look much nicer. A side benefit is that we went for red velvet-appearance curtains and they are right next to our comfy/projector area, making it feel even more like a cheap cinema

Where did you acquire these/how much for?

the murder curtains or the normal ones?

The not normal curtains.

We bought it by the roll, cut it and built them:

This is what we bought:

Pictures of the final product: