For the last few weeks I’ve been collecting leftover building materials in my area and ferrying them down to Silvertown to the Craftory Workshop. It’s broadly a makerspace/art space/community centre. The building is the former Tate Institute, and it’s a gorgeous Victorian structure built in 1887. It’s largely sound, but water is getting in in a lot of places. The building was bordering on dereliction when they moved in, and there’s not much budget for material after they did basic making-safe.

They’re not a machineshop, so would only really be interested in general hand tools and craft materials.

One side of the main hall has been particularly badly vandalised and is missing all it’s clay shingles. By my estimate they’re looking for about 683 flat red clay tiles, about 6.5" by 10.25". Everything I’ve found so far has a camber/curve to it. They also need an additional 130 that are one and a half times the width (so about 9.75" wide) for correct overlaps at the edges.
There’s also about 100 specially shaped tiles I’ll be trying to reproduce in pigmented concrete as they seem entirely non-existent.

A long term goal is also to rebuild the damaged garden wall and replace the robbed out ironwork. At my estimate, that will need about 3500 bricks. So again, on the slim odds you know of a lot going spare, let me know. They may soon have the space to store them once their cellar is cleared of debris.

I have been told they are underlay tiles. 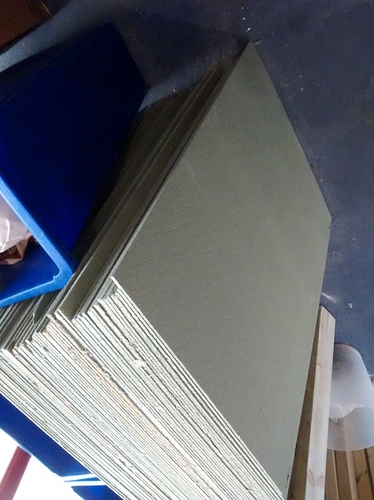 Possibly, I’ll ask. What size are they and how many are there?