I am interested in starting a Hackspace of my own at RAF Brize Norton. I have a number of questions I’m hoping the wider Hackspace audience can help with?

Finally, I look forward to joining this great organisation and hopefully make some meaniful contributions to the greater community. 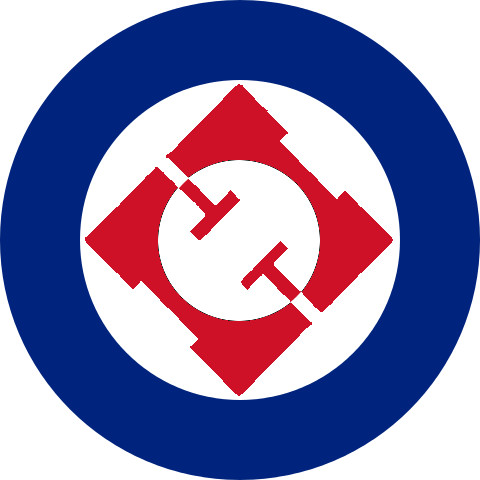 I have not had any replies to my original questions. So I am posting my proposed Hackspace logo. Let me know if there are any concerns or queries. I shall deem no response to be that my logo is approved.

The logo looks good, but there is some discussion about maybe changing the main hackspace org logo at some point to designate that we’re a group of groups, and differentiate it a bit from a lot of other hackspaces what have used the giant H - but this is unlikely to affect you really. Especially as that logo looks rather good.

We’re at the moment starting up the org, so we will be working on fees etc, and we plan to implement them in the future to allow us as a group to use funds to further work that should benefit all members (such as working with insurers, going to maker events, etc. But at this point, nothing has been tied down on how or when exactly we will be doing this.

What is needed to join the org is that you need to follow our hackspace guidelines, which can be found here:

The major points, since you are proposing to have a hackspace on a military base, will likely be:

“is member owned/operated,”
“has a democratically elected board of at least 3 directors”
“encourages engagement with, and opening to, the public”

The latter one is our major concern, as we understand the levels of security required on military bases, and the other two are concerns about the hackspace and the org its self being separate from any major company, government body, etc, in the main, and being democratic.

As for help setting the space up, what are your ideas so far? Have you visited another hackspace or two? Are you aiming for 24/7 opening (like Manchester and London), or more “express time and when a keyholder is available” like Newcastle and Richmond MakerLabs? I believe you’ve talked about having some fairly niche tech areas such as medical and aeronautical in your space, so then it comes down to equipment sourcing, etc.

The first step for most hackspaces is finding a group of interested people who are willing to pay membership, and then finding a space that fits that budget minus a bit for equipment, maintenance, etc (if the MOD can supply a space, that can bring down dues a lot, or make the money available to spend on equipment and upkeep).

Equipment can be sourced from members (older tools, tools that were bought for one purpose but have been left in the attic, tools from family members who have passed away), aquired from companies in exchange for advertisement etc, or bought - sometimes a hackspace can just buy a cheap piece of equipment out of its budget, but more frequently it’s a question of a load of members pledging £10+ for a shiny tool that they all want. Manchester’s A2 laser was bought this way (http://wiki.hacman.org.uk/Pledges/Frikkin_Laser).

What other advice do you want? What information would you find useful?

Thank you for your enlightening and helpful reply. You have answered most of my questions. Before I go further, I thought it would be best to answer some of your answers/ concerns.

The RAF Brize Norton Hackspace will be member owned and operated. The MOD/ RAF will not dictate what we can or can’t do as it is considered a social club, which is run for the betterment of serving personnel. As long as our financial books are balanced and we don’t bring the RAF into disrepute, then we have free reign.

The club will initially have 7 committee members. They will be: Director, Deputy Director, Treasurer, Secretary, Equipment, Community Liaison, and Future Plans. I will be the Director for the 1st year, and will select the 6 other initial members. We will then have an annual Annual Group Meeting (AGM), where anyone can volunteer for any position. It will then be opened up to the group to vote. Hopefully this should answer your concerns about democratically elected board and member owned.

As for access, you are right that initially we will be open only to civilian and servicing personnel who have access to RAF Brize Norton (and their spouses or children). I have spotted some potential club buildings outside “The fence” but it will all depend on funds. To make up for this, I am planning for the hackspace to be very active in the local community. I am planning to run events at local schools, Air Cadet groups, Scout Groups and local community hubs. RAF Brize Norton has 200 STEM ambassadors, and the hackspace will be looking to liaise with them closely.

I have visited Cheltenham and Oxford Hackspaces so far. Both clubs were very helpful and forth coming with advice. As such, since my first post, most of my questions have been answered. Though I do plan to visit Swindon and Reading Hackspaces soon, so I can get a broader idea of how other hackspaces are run.

At the moment I have 2 further questions:

E-mailing contact@hackspace.org.uk is currently the best way to get in touch with the Foundation and keep the team working on the Foundation up to date, aside from posting on this here discourse/forum, while the organisation and development settles.

Do you plan to have a method by which members can join if they are cleared by existing members even if not RAF staff or direct family?
How far is family? Can a cousin or uncle or grandfather be member?

Or not give them full access but only access on certain days and be a different category member?